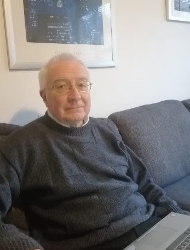 Robert has been a volunteer with West Lothian Council's Advice Shop for around 7 years. He has 2 quite different roles:

Robert worked with IBM and retired in July 2013.  He hadn't planned to retire until November 2014 but due to circumstances he retired earlier than planned.  Because he stopped working so suddenly, he realised that he still needed structure in his life and as he had always enjoyed working in IT, he thought this might be a good place to start his voluntary work.

Robert's wife saw an advert for Medical Assessment Buddies and thought it might be something Robert would be interested in.  He contacted the Advice Shop, attended an informal interview and started the training within a few months of seeing the advert.  During the interview Robert discussed his IT skills and how he would like to help people improve their IT skills in the future. Robert said that the training to become a Medical Assessment Buddy was a lot more in depth than he thought it would be and that it gave him a good background knowledge of what his role would involve and how to deal with customers during a very stressful time.

Eventually Robert got the chance to share all his IT experience as he became an IT Buddy.  He completed some additional training and started to volunteer with Access2Employment helping people in a Job Club in Forestbank Community Centre.  He did this for about a year and then moved to Fauldhouse Centre.  During his time in Fauldhouse, he was approached by the manager to run additional sessions to enable people to extend their IT skills.  Unfortunately, this wasn't well attended and he moved on to Almondbank.  Robert runs one 2-hour session per week and offers 1:1 tuition in pre booked 1-hour slots.  People come along to work on whatever they want to learn so each session is very different.  For example, 1 person might want to learn how to use Facebook on their phone and then the next person might want to learn how to edit photographs on their laptop.  He also offered IT support to members of the 50+ Network and ran IT sessions for residents in Rosemount Retirement Home.

I asked Robert what he thought people get from having a Medical Assessment Buddy and he said that people can find out what the assessment will be like during a pre-assessment meeting/phone call, so they are more prepared and that they feel more confident having someone to help and support them at the assessment.  He also said that it can be the simple things that help; having someone to speak to while you are waiting as this help to alleviate anxiety.

When asked about being an IT Buddy he said that he feels people will always learn best when learning about something they have an interest in e.g. photo editing, social media.  This will, in turn, give the person confidence to learn other things.  He said that Internet security is a big concern for lots of people but once they have an awareness, it encourages them to try things.

I then asked Robert what he gets from his volunteering roles and he explained that being an IT Buddy is mainly good fun and that he gets a feeling of satisfaction when someone learns something new and begins using it in their everyday life.  With regards to his Medial Assessment Buddy role, he said that he gets a lot of satisfaction knowing that he has helped someone to be as well prepared as possible for their assessment and that it is especially satisfying when the benefit is granted.

Robert also volunteered with a charity to provide IT support to its customers, but unfortunately the charity folded.  However, Robert and another 2 volunteers continue to offer the support In Waterson's coffee shop in Livingston on a Tuesday morning.

Robert feels that his volunteering fits in well with his life and enjoys being part of the Advice Shop team.  He said that he feels valued and that all staff are very welcoming.  He has attended staff meetings to provide staff with a better understanding of what volunteers do within the service, helps with volunteer recruitment by attending Information Days and continues to attend regular volunteer meetings and any training offered.

Unfortunately, due to COVID 19 Robert is unable to volunteer as an IT Buddy at the moment but is continuing to offer telephone support to Advice Shop customers who are having their medical assessment carried out over the phone.  Robert phones the customer at an agreed time and gives them all the information they need to be prepared for their telephone assessment and offers them the opportunity to ask questions.

After reading Robert's story maybe you would like to give volunteering a try.  Why not check out all the different volunteering roles available in the Advice Shop or email us at volunteering@westlothian.gov.uk for further information.