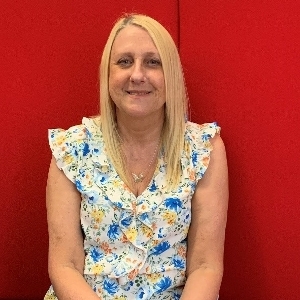 Janet became a volunteer after being diagnosed with Multiple Sclerosis in 2003.  She managed to continue working in the factory for approximately 18 months after her diagnosis and during this period her employer did a lot to help her.  However, the job became too much for her physically, and she had to make the difficult decision to leave.

After a few months Janet decided to look at volunteering opportunities and through the Job Centre found a suitable position with Capability Scotland working in their charity shop in Bathgate.  This role was originally for 6 months but she enjoyed it so much she stayed for 5 years until her health deteriorated and she needed to take a break from volunteering.

After taking 2 years off to rest and attend various hospital appointments, Janet decided to give volunteering a go again.  She went along to Voluntary Sector Gateway and they helped her to look for a suitable role.  Janet completed the training and joined West Lothian Council's Advice Shop as a Disability Benefit volunteer in 20??. She really enjoyed this role and did it for 5 years and then a friend spoke to her about volunteering with the Macmillan Cancer Information and Support service and as this was an area she was really interested in she decided to find out a bit more. Her dad had had cancer, and she felt that he was so well looked after, that this was her opportunity to give something back, so she decided to find out what roles were available.  She liked the sound of the Information & Support volunteer and successfully applied for the role.  As she was already a volunteer with Chest, Heart & Stroke Scotland she knew she couldn't continue with all 3 roles as she couldn't allow her health to suffer, so made the difficult choice to give up her role as a Disability Benefit volunteer.  Janet attended the Macmillan training and was given the chance to shadow some of the existing volunteers and staff before starting to volunteer in the hubs in 2018.  She said that it is a very different role from both the Disability Benefit volunteer and her role with the Chest, Heart & Stroke Scotland but that she gets a lot from it as she enjoys helping the people who are directly affected by cancer, their family members, friends and carers.  Volunteers in the hubs offer support, signpost to other services, arrange benefit checks and just generally offer a listening ear.

Janet was scared and insecure when she applied for her role as a Disability Benefit Volunteer with the Advice Shop but said that, between the training and shadowing opportunities, she was given the confidence to carry out the role to the best of her ability.  She said the training was excellent and staff who delivered the training were very friendly and approachable.  She also said that she enjoys the ongoing training offered and has attended many different sessions.

As a volunteer Janet can pick the times that suit her best to carry out her volunteer roles and to be involved in things that don't require a lot of physical effort.  Fatigue is one of the symptoms of MS and she occasionally can't attend a session but said that staff and other volunteers are very understanding and know that by missing one session to have a rest can often avoid her being absent for weeks.

Janet enjoys helping people in any way she can, and although her roles are very different with Macmillan and Chest, Heart and Stroke Scotland she gets so much from both.  Janet feels that her volunteering roles are perfect for her, and they allow her to manage her MS. She also said that being able to volunteer helps to improve her mental well-being and would recommend volunteering to anyone.

Janet has been unable to volunteer since March last year but has recently returned to her role with Chest, Heart and Stroke Scotland and is delighted to be back helping their members have a great time at the club.  She also hopes to be back volunteering with Macmillan soon as the hubs start to reopen again.