Core paths can be paths, waterways or any other means of crossing land to facilitate, promote and manage the exercise of access rights under the Land Reform (Scotland) Act 2003, and are identified as such in access authority core paths plans. A Core Path Plan provides a basic framework of routes for the purpose of giving the public reasonable access throughout a particular area for walking, cycling, horse riding and other non-motorised activities . 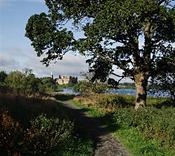 Under the Land Reform (Scotland) Act 2003 West Lothian Council had a duty to prepare a Core Path Plan, a network of the most useful and important paths for people of all ages and abilities. The Plan was put together in consultation with local people and land managers to try to make sure that the network meets community needs whilst minimising the impact on land management practices.  The Local Authority does not have a duty to improve, promote or maintain core paths, only to make a plan.

Core paths in West Lothian may be rights of way, paths, tracks or any other key routes crossing land to facilitate, promote and manage public access rights.  The most important routes, particularly those in and around towns and villages, were identified by West Lothian Council in the Core Paths Plan and take priority for maintenance and improvement as well as being protected from development or closure.  Not all core paths in West Lothian are signposted or suitable for all users, but they offer choice of routes across the district.  In addition many others paths exist that form part of the wider network of paths.  The West Lothian Core Path Plan was adopted in 2013 and work is ongoing in bringing the network up to standard.

Issues such as removal of signage, fly-tipping, blocked access, etc. can occur on access routes and you can help us by reporting any problems you come across by logging the issue online at Core Paths and Rights of Way Issues

Descriptions of paths in the Core Path Network

The Plan has been split into pdf files and includes map detail and descriptions of paths in the Core Path Network.

The paths which each map covers are detailed on the list below."

Countryside paths are prioritised for maintenance and work is carried out by in house teams, contractors, volunteers and in partnership with other groups.  If you want to report an access issue on a path, please contact us Core Paths and Rights of Way Issues