Reducing the carbon emissions from the council's own activities and services and contributing to the organisation being able to lead other partner organisations and businesses within West Lothian to achieve similar reductions.

As a public body, West Lothian Council has a duty to help achieve national climate change and sustainability targets set by the Climate Change (Scotland) Act 2009.

The council has been committed to taking action to mitigate and adapt to the impacts of climate change for some time. West Lothian Council signed the Climate Change Declaration in 2007 and declared a 'Climate Emergency' in September 2019.

Since our baseline year of 2013/14, the council has significantly exceeded its emissions reduction target of 20%, achieving an overall decrease of 40%. West Lothian Council's annual emissions can be found in our annual

There are a number of direct actions that have contributed to our emissions reductions including the implementation of energy efficiency projects, replacing street lighting with low energy LED equivalents and investing in renewable and low carbon technologies such as biomass boilers and solar photovoltaic (PV) panels. Another key driver has been a reduction in the emissions factor for grid electricity.

The National Targets
Net zero emissions are achieved when the emissions produced are balanced by those removed from the atmosphere. The Climate Change (Emissions Reduction Targets) (Scotland) Act 2019 sets targets to reduce Scotland's emissions of all greenhouse gases to net-zero by 2045 at the latest, with interim targets for reductions of at least 56% by 2020, 75% by 2030 and 90% by 2040 from a 1990 baseline year. To help ensure delivery of the long-term targets, the legislation also includes annual targets for every year to net-zero. 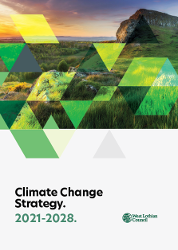 It contains 28 actions for the council across areas such as energy, transport, waste and biodiversity. Progress against the strategy's emissions targets will be reviewed annually as part of our annual Climate Change Report and updated every five years.