In the serene Bathgate Hills, around one mile east of Torphichen, is the Witchcraig Woodland & Korean War Memorial. This unique 8 hectare site combines both a memorial garden and a hilly, woodland environment with walking routes to explore and excellent views at the summit. 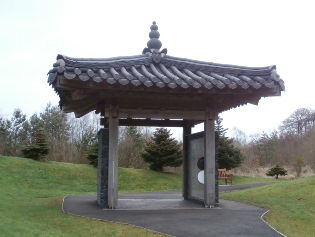 At the entrance of the site sits the landscaped Korean War Memorial garden which, to the centre, has a historic Korean style wood and slate crafted Pagoda amidst two grass mounds, arranged like the Ying and Yang.

On the mounds are 110 Korean Fir trees and around 1100 Scottish trees representing the servicemen who were killed. The site, which is the only Korean War memorial in Scotland, opened on the 20th June 2000, marking the 50th anniversary of the war's commencement. It was created by the Lothians and West of Scotland Branch of the British Korean Veterans Association and has been managed by West Lothian Council since 2006.

During 2013, a new and more permanent Pagoda was constructed and a service was held to re-open the garden. This peaceful and considerate national memorial offers a tranquil environment for taking a quiet moment to reflect. 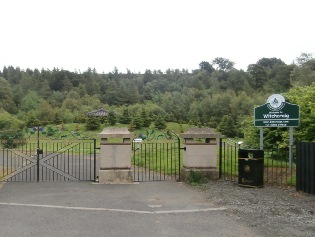 Accessible from the memorial garden, this small woodland, which is perfect for short walks, offers routes which showcase the tremendous natural beauty of the area.

At the top of the hill, outside council ownership, is the Witchcraig Wall and Refuge Stone. In this location you are rewarded with spectacular panoramic views.

The Witchcraig Wall is a small enclosure built in 2003 through cooperation with the local landowner to provide a resting place for hill walkers whilst exhibiting the geological heritage and diversity of the Scottish central belt, with 43 rocks from the region integrated into the structure.

Near the wall is a medieval Refuge Stone with the Cross of Lorraine etched onto its surface. This stone marks an ancient periphery where outlaws could find sanctuary.

Witchcraig has a mixed broadleaf and conifer woodland which provides habitat capable of supporting numerous species. Most of the trees are around 20 years old but the site also has mature trees. Tree species include Beech, Oak, Cherry, Apple and Birch. To the east of the site is grassland with scattered trees. In the grassland, plant species such as creeping buttercup and white clover can be found. Animals include badgers and rabbits, whilst Kestrels have been sighted.