Situated in the scenic Bathgate Hills, a couple of miles from the town of Bathgate, Ravencraig is an extensive 54.5 hectare amenity woodland site, which offers a series of footpaths across a largely hilly, natural environment leading up to the ancient Raven Craig cairn and summit. 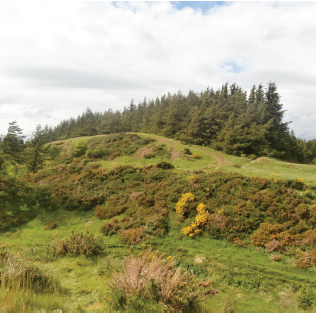 Ravencraig welcomes visitors with a surfaced footpath that leads to a small pond positioned close to the entrance. However, this is only one of Ravencraig's many noteworthy features.

History of the woodland

The site was once used as a deer park from 1750-1805 by land owner Lord Hopetoun and the walls and ditches (known as ha-ha's) throughout Ravencraig are the remnants of this.

In 1875, the land was quarried when the land owner, a wealthy Captain, made vain efforts to unearth silver.

Rather than silver, less valuable copper and limestone were mined instead. Ruins of a farm steading to the east serve as a reminder of the sites agricultural heritage. However, since 1997 West Lothian Council has managed Ravencraig as amenity woodland.

Nearby the old steading is a narrow and undulating footpath that leads up to a hilly grassland area which provides a wide vista of the region. To the north east is the Firth of Forth, whilst to the south the Pentland Hills can be sighted.

Further north, unsurfaced footpaths traverse uphill to a dense coniferous woodland environment. A walk through the woodland leads to the Raven Craig cairn and summit which is amongst the highest points in West Lothian.

The cairn, which is dated from the Bronze Age, was only discovered in the late 1990's and has been classified by Historic Scotland. Cairnpapple and the Knock are other more well-known sites with significant archaeological history in the mysterious Bathgate Hills area. Both can be sighted to the north of the summit.

Ravencraig is a mixed woodland habitat with areas of grassland. To the north, the woodland is predominantly coniferous. Species include Scots Pine, Larch and Spruce.

To the south, deciduous broadleaved species such as Oak, Alder and Horse Chestnut are present.

The woodland environment, which is diverse in its age, sustains a plethora of fauna including mammals like the Badger, Fox and Stoat. In addition, bird of prey species such as Buzzard and Sparrowhawk make their home here. What's more, the small pond near the entrance plays host to an assortment of aquatic based creatures such as Dragonflies and Damselflies.

Ravencraig is accessible by car to the north east of Bathgate. From North Bridge Street in Bathgate town centre, travel on Hopetoun Street and then up the steep Drumcross Road onto the minor road that leads into the countryside.

Travel for around two miles until you reach the Ravencraig car park on the left. The nearest train station is in Bathgate. Unfortunately no bus routes run directly to Ravencraig.