In celebration of next year's Platinum Jubilee event which will mark Her Majesty The Queen's 70th year on the throne, local authorities across the United Kingdom are invited to take part in the Platinum Jubilee Civic Honours Competition. This special competition will allow local authorities to submit an application for an area they wish to be considered for city status by the closing date of 8 December 2021, and the town of Livingston has been nominated by West Lothian Council.

With Livingston's 60-year anniversary of gaining a new town status approaching next year, this competition is a perfectly fitting way of demonstrating and emphasising Livingston's unique and distinct identity. 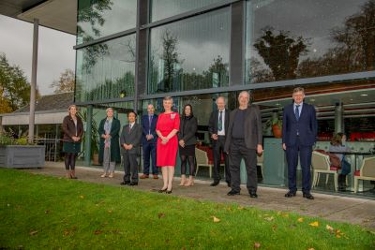 Although one of the UK's youngest towns, Livingston is proud of its heritage and the community have come together to celebrate the town's important anniversaries from its 10th birthday in 1972 to more recently in 2012 when the town celebrated its 50th anniversary.

Next year, Livingston will celebrate both the town's Diamond Jubilee and the Queen's Platinum Jubilee. The gaining of city status would be the perfect way to mark both occasions and for the community to celebrate together once more.

From being a village, to a new town and centre of regional development, the next logical step for Livingston would be to gain city status. The original vision for Livingston was always the creation of a Garden City; city status would finally fulfil this vision.

Gaining city status for Livingston would positively boost Livingston economically, encouraging potential inward investment from companies wanting to expand their business. Within this economic boost, this would create potential employment opportunities for inhabitants of Livingston and further afield, reducing unemployment.

Livingston is already home to some of the most dynamic companies in the country. Companies such as Mitsubishi, Sky and Shin-Etsu Handotai are some examples of long-term, stable businesses which have remained in Livingston for around 30 or more years, when Livingston became known as the capital of  'Silicon Glen'. Gaining city status would encourage more investment from companies wanting to expand their business potentially resulting in more employment opportunities for inhabitants of Livingston and wider West Lothian.

Community Engagement - Have Your Say

Community participation and involvement, including input from local elected members, local schools and West Lothian's Lord-Lieutenant will help to showcase the many strengths of Livingston in support of the application process.

Look out for more information provided on the council's social media pages on how you can get involved in support of Livingston's application which will follow over the coming weeks.

Please send any messages of support by email to livingstoncity@westlothian.gov.uk. We'd also welcome any comments on:-

All incorporated community feedback into the application will be done so anonymously and full details of how any information you provide will be used are provided within the below privacy notice.

The below eBrochure gives a snapshot of just some of the many reasons why Livingston is more than capable of achieving city status. This features key stakeholders of the Livingston area who are all in support of the city bid entry, and gives a glimpse of some of the main features which will be highlighted within the application.

Historically settlements with a cathedral were classed as cities which is why we see a number of comparatively smaller cities today, such as the English cities of Ely, Wells and Salisbury. A cathedral however is not a requirement for a settlement to be granted city status (there are currently eighteen towns in the UK with a cathedral which are not cities), and in more recent decades city status has been granted by the British monarchy on the advice of ministers through competitive bids put forward by towns. Recent bids for example have been:-

A 'High Street' is a common street name for a primary business street, and both cities and/or towns may feature a High Street in their respective areas without this being a requirement for either.

Whilst Livingston does not have a traditional 'High Street', the town centre remains the main hub for retail, governance and administration, sport and leisure and education, with all areas being in close proximity of each other.

As the largest town in West Lothian, Livingston is surrounded by a number of different amenities which cater for everyone. From the town's busy shopping Centre which features a whole host of shops and food and drink venues, it also includes a cinema, an indoor crazy golf course, an aerial adventure course, and even a small museum dedicated to the town of Livingston itself!

Just a short commute away from the town Centre, the surrounding area is encompassed by the likes of Almond Valley Heritage Centre, Howden Park Centre, Livingston Skate Park, as well as a variety of gyms and outdoor parks. West Lothian College is also situated in the heart of the area, all of which highlights just some of the many reasons which makes Livingston so desirable as a place to travel to as well as call home.

With the impressive transport network in Livingston which includes two train stations, a range of different bus services covering multiple routes, and many spread out taxi pick up and drop off points - these amenities are made as accessible as possible for those who live and those who are visiting the town of Livingston.

For what specific amenities Livingston may lack, the diverse range on offer leaves little to desire.

Livingston will celebrate it's 60th year of gaining new town status next year and within this span of time the town has experienced incredible growth and development. Despite being considered a modern town, Livingston is steeped in history which is still very visible today, particularly around the Livingston Village area which was home of the original village of Livingston and the local miners.

As well as an interesting past, Livingston also has been home to incredible innovation over the last six decades which has contributed to the towns impressive presence. With Livingston's deeply rooted history as well as an exciting future of continued growth and innovation ahead, Livingston presents the perfect town to be nominated for the city bid competition.

No, the city status bid is completely cost-free. It is not diverting resources, money or time from other council services and projects.

There is no evidence that city status has raised the price of living and taxes elsewhere. City status would instead potentially create more economic advantages for Livingston. Taking Inverness as an example - after receiving city status, there was an expansion of housing and money was invested in revamping areas of the city which had been previously struggling. The renewed growth overall attracted new businesses to the area and attracted more tourism.

Both Perth and Stirling also emphasise how strong and stable their economy is which provides a prosperous environment for business growth.