A special ceremony has been held to mark the official unveiling of the Jim Walker Partnership Centre. 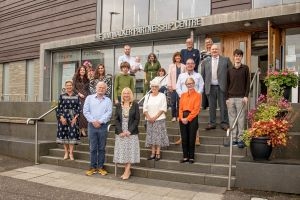 Provost Cathy Muldoon welcomed members of the late Jim Walker's family and local elected members to a small ceremony at the former Bathgate Partnership Centre.
Councillors voted unanimously to rename the town's hub for council and community services in 2021 following his sudden passing.
Jim Walker was a well-known and much-respected figure in his home town of Bathgate and across wider West Lothian. He served as a councillor on West Lothian Council and its predecessor authorities for over 40 years, after first being elected to Bathgate Town Council in 1972.
Jim was also heavily involved in a number of other important aspects of Bathgate life, including Bathgate Procession, Kirkton Brass Band and Bathgate Thistle Football Club. He was awarded an MBE (Member of the British Empire) in 2013 in recognition of his work in the community.
Provost Cathy Muldoon said: "It's a huge honour to officially unveil the Jim Walker Partnership Centre at the heart of the Bathgate community he served so well for so many years.
"Jim made a massive contribution to community life to the town where he was born and bred throughout his life, so it's fitting we have a lasting tribute like this.
"He was well-liked and hugely respected at the council and across West Lothian for his dedication to public service. He was also known a dedicated family man, so it's fantastic to have so many of his family along to mark the occasion."