The Broxburn and Uphall Town Service bus will continue until April 2023 following a successful pilot. 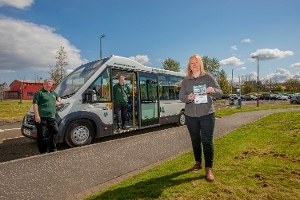 The service was introduced last April as a pilot, in partnership with Dial-A-Bus operator HcL.

The council funded pilot sought to support older people, families with young children and those with mobility issues who live in the area, who have issues due to the hilly nature of Broxburn and Uphall. The service enables local people to access key services such as shops and health in the town centre, as well as existing public transport links for onward travel.

The service currently operates between 9am and 6pm Monday to Friday on a 2-hourly basis.  From June, the frequency will increase to hourly and will also include a Saturday service between 9am and 1pm.  There will be some minor route adjustments to include Cardross, Rashierigg and Dunn Street following passenger feedback to serve these areas. Full timetable details are available at Travelinescotland.com

Both 2A and 2B routes operate a two-hour loop between the town centre facilities, such as Strathbrock Partnership Centre, shops such Co-op and Lidl, and residential areas including Stankards/Houston Gardens, Crosshill Triangle, Kirkhill, Loaninghill Road, Timmeryetts/Galmeilen, and Wyndford Avenue. They operate on a hail and ride basis in residential areas where there are no formal bus stops. Passengers can signal the driver to stop at any point where it safe to do so.

Fares are £1.70 for adults, and £0.90 for children, with concessionary bus pass holders able to travel for free. Please use exact fare as no change can be given with contactless payment also accepted. All the vehicles used on the 2A and 2B routes are fully accessible and are specially adapted to carry combinations of wheelchair users and other passengers safely and comfortably.

The council's usage figures highlight that there was an increase in passenger numbers month on month and that the service now regularly carries more than double the number of passengers than it did in the first month of its operation. Customer feedback was also very positive. A large percentage of those surveyed said that they used the service to access local shops, in particular food providers.

An important function of the town service was to connect passengers to the wider bus network to allow onward travel and over 90% of passengers confirmed that was the case.

The vast majority of passengers are aged over 60.

Through partnership working with the community bus provider HcL, reporting information has been provided which allows officers to scrutinise performance and patronage down to a journey level, which has not previously been available for contracted bus services.

Only 20% of the bus network in West Lothian is subsidised by West Lothian Council with the remaining 80% being owned and fully operated by private providers.

"We are pleased to be in a position to extend the Broxburn and Uphall Community Bus Pilot by a further year.

"Over the past nine months council officers have been liaising with local transport providers and third sector providers with a view to developing proposals across different transport models. However the impact of the pandemic and the national driver shortage has resulted in the removal or changes to many commercial services. Local providers have not therefore been able to expand operations into other areas. Officers within my service will continue to work with providers to develop proposals and report back to the council after the summer to provide an update on the potential for pilot operations to exist in other areas."