Have your say on budget reduction measures - survey now open

Take part in our public consultation on a range of budget measures that aim to reduce spending, alter local services and address the council's budget gap.

West Lothian Council has built a new 175 metre of floodlit track in Balbardie Park, Bathgate which is now ready to use. 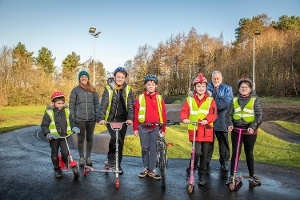 The pump track can be used by bikes, balance bikes, scooters, skateboards, surf-skateboards and skates. They are carefully designed to be ridden without pedalling and by only using your bodyweight and the features to 'pump' yourself around the track.

"I am delighted the new park is now open for use.

"Pumptracks started off being used as a fun way to build up bike skills and particularly skills for off-road cycling, but these new asphalt tracks can also be used to improve skateboarding, surfing and snowboarding skills.

The track is situated in Balbardie Park together with lots of other outdoor facilities, including the Peace Mile and the historic BMX track and the skatepark, plus the indoor facilities at Xcite Bathgate.

It's close to central Bathgate and Beecraigs mountain-bike facilities, so you can take your pump track skills to the slopes. We expect the track to be used by individuals, cycling groups, community groups and local schools in the area. Funding for the project was received via developer contributions, sportscotland and Suez Communities Trust."

It is designed by Architrail Velosolutions UK. Some soft landscaping work has still to be completed but the track is now ready for use.