Nelson Park in Armadale is set to undergo major improvement works as part of Her Majesty, The Queen's Platinum Jubilee celebrations in 2022. 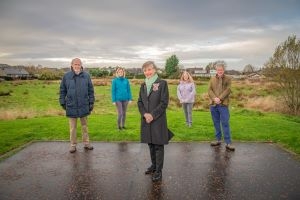 West Lothian Council is working in consultation with Green Action Trust to draw up environmental proposals ahead of Nelson Park being designated as part of The Queen's Green Canopy, a unique initiative which invites people from across the United Kingdom to plant a tree for the Jubilee.

Proposals being considered to improve the park include tree planting, surfacing the existing grass path and a seasonal wetland area, with work expected to commence in the New Year. Community tree planting events will then be held with the remaining work proposed for completion by the end of March 2022.

Representatives from West Lothian Council and Green Action Trust joined with The Queen's representative to West Lothian, Lord-Lieutenant Moira Niven MBE, in Nelson Park to mark the start of the project.

"We are also delighted to be working alongside Green Action Trust on this exciting project, which I'm sure will be hugely appreciated by the local community in Armadale when complete."

Moira Niven MBE, Lord-Lieutenant for West Lothian said "This is an excellent project to develop a high quality green space in Armadale for the benefit of the community. I am delighted that this investment is being undertaken as part of the Queen's Green Canopy to celebrate the Queen's Platinum Jubilee.  I hope community groups will also wish to mark this important anniversary through tree and hedge planting projects".

Michael Roe, a Trustee of Green Action Trust said "It's great to see an area of neglected land being converted to a green space that the local community will enjoy and be proud of and which will also be part of The Queen's Green Canopy. Green Action Trust is already proud to be a QGC Friend and we are really pleased that West Lothian Council has identified Nelson Park as a site for community tree planting and enhancement."