A special celebration has been held to mark a half century of the fantastic Almondell and Calderwood Country Park near East Calder. 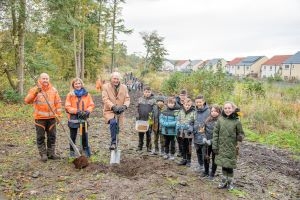 The country park was created in 1971 by bringing the former Almondell Estate grounds and the nearby, more natural Calderwood together, to produce one of the first parks of its kind in Scotland.

Activities were held in the park recently to mark the anniversary of the much-loved local resource, involving local school children, Friends of Almondell and Calderwood and West Lothian Council's Parks & Woodland Team.

Leader of West Lothian Council, Councillor Lawrence Fitzpatrick, started the weekend of events with the planting of two special trees, some of the first to be planted in West Lothian for the Queen's Green Canopy to celebrate her Platinum Jubilee.

For more information in how you can take part in this campaign by planting a tree in your own garden or taking part in local tree planting activities, please visit Queen's Green Canopy

Councillor Lawrence Fitzpatrick said: "I'm absolutely delighted to plant these new trees in the incredible surroundings of Almondell and Calderwood Country Park. It's a perfect site for the trees to mark Her Majesty's Platinum Jubilee.

"This was one of the first country parks in Scotland, creating a place for local residents and visitors to get a taste of the countryside and appreciate the many benefits of nature.

"The additional of facilities such as toilets, visitor centre, trails and other outdoor activities also helped ensure everyone was able to appreciate our fantastic outdoors, especially families.

"We know how much the beauty of Almondell and Calderwood is appreciated by local residents more than ever, with visitor numbers increasing by over 90% during lockdown as people reconnected with the nature on their doorstep."

Other events taking place over a beautiful Autumn weekend in the park included over 80 children from nearby primary schools, St Paul's and East Calder, planting over 400 trees in the South Drive Wood.  Over 1,000 new trees were planted in the park over the course of the weekend.

More stable broadleaves like oak and birch with some conifers for all year- round colour were planted to replace the previous larch trees which were felled, as they had begun to blow down in this narrow and exposed strip of woodland. The current flowering laburnum and cherry along the drive will be enriched with more ornamental trees with spring blossom and autumn colour, along with fruiting small trees and shrubs to provide food for birds and other creatures.

The pupils also had the chance to see timber felled from the woods being sawn into way-markers and fencing materials for use in the park giving the cut trees a second life. West Lothian Council's Parks & Woodland Manager, Eirwen Hopwood said: "Almondell and Calderwood Country Park is a superb free resource for the local community, with a lot of work taking place to ensure it remains this way for another 50 years.

"Extensive woodland management works and access improvements are being carried out as part of a Woods In and Around Towns project, funded by grants from Scottish Forestry, along with other funds from the council and planning contributions from the adjacent Calderwood Development.

"Some of the woods have been felled and are now being replanted, other woodland areas have been thinned to allow room for the remaining trees to grow and tree safety felling and pruning undertaken.  Paths are being upgraded so that they can be negotiated all year round."

Celebrations also saw school pupils shown the newly restored wall around the old walled garden.  This historic stone and lime mortar wall partially collapsed a number of years ago.  After much effort, West Lothian Council and the very committed Friends of Almondell & Calderwood managed to secure funding from the National Lottery Heritage Fund, Scotmid and Sustrans Art Routes to supplement that allocated by the council, which has finally allowed this part of the heritage of the old estate to be rebuilt using traditional lime mortar techniques.

Other activities included: guided heritage walks by the Friends, autumnal scavenger hunts and games to encourage responsible access in the countryside organised by the rangers; Forest Therapy taster sessions were led by Woodlands Breathing; chainsaw carving from tree trunks to created lots of woodland creatures; and snowdrop and daffodil bulb planting.

Future plans for the park include a heritage trail around the park. Hard-working members of the Friends of Almondell & Calderwood group have spent many hours researching the fascinating history of the country park, which has a number of significant structures such as the Naismith Bridge and is steeped in industrial, built and natural heritage.